Banaba Island, which was formerly also known as Ocean Island, is a solitary raised coral island and the westernmost island of the Republic of Kiribati. It has only an area of 6 km2 , but it’s highest point is also the highest point of the whole of Kiribati. Like Nauru, it used to be incredibly rich in phosphate, which was mined for decades and used to fertilize the fields of New Zealand and Australia. As in Nauru, the effect on the island has been devastated and through phosphate mining the landscape of the island has drastically changed. The Banabans, who are ethnically distinct to the i-Kiribati, have been largely forced to migrate because of the phosphate mining and the Japanese occupation in World War II. Politically, the island today is governed by the Rabi Council of Leaders and Elders, which oddly is not based in Banaba or even Kiribati, but on Rabi Island, Fiji, to which most of the original Banaban population has migrated.

Little is known about the sports activities of the 335 people living on Banaba today. Football, however, is a positive exception! A club representing Banaba is participating regularly in the nationwide Kiribati championship, which is played over a few days a year in the i-Kiribati capital on South Tarawa. While not in the best quality, even a video of the Banaba team playing vs. Onotoa in the 2013 edition of the “Te Runga” Championship exists, from which the following picture was taken: 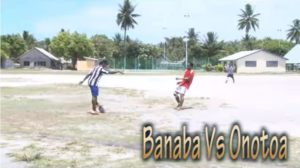